MUSIC FROM SLOVENIA (a new segment from Ziga Jenko) 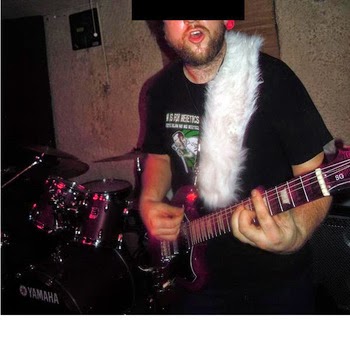 HIIIIIII! It's been a while, I admit. Things happen. Festivals happen. New label releases happen. All of this will be discussed in due time. But let's get on with it. Ziga Jenko plays in Slovenian free improve band oOo - they are pretty damn rad. He also writes for Hrup magazine over there, and he interviewed me for it last year. We are going to swap stories - five bands each from our respective countries. Here is his first batch:

I was surfing around and looking for great music blogs one night. I’ve visited few and mostly they offered generic global music that everybody is writing about. And so my eye caught a great name: Sonic Masala. It promised a great mix of everything. So I clicked the link and couldn’t be happier with the diversity of music and a lot of Australian bands that I had never heard of. I was always a fan of Australian bands such as Cosmic Psychos, Beasts of Bourbon, The Saints, Tame Impala, The Necks, The Birthday Party, X, Dirty Three … Here I am one year later trying to give you a piece of Slovenian music as Brendan will do the same at our web music magazine Hrupmag. So let me pick first five for you.

Incurabili is a dirty blues duo. Two great vocalists have joined their forces. Bruno Subioto who played before in garage band like The Spoons, Hic etNunc, Matchless Gift and still is in Roger N. Out. Well Roger N. Out was founded on the ashes of band Dicky b. Hardy, former Niko Novak’s band. Niko and Bruno have recorded 4 albums together as Incurabiliand Fair enough is a great album with atmosphere which is greatly represented in the cover photo. They play all instruments also live at the concerts and they do not do any dubbing while recording songs for album. But not on this one, they made a step further and gave to the songs even more power with dubbing their strongest attribute, the voice. Both of them are great interprets so while listening you get drifted into a dark world of alcohol, sex and wild life.

See is their fifth album. It has been selected as one of the finest of year 2014 at almost every musical media here in Slovenia. It had really great impact when it came out. I don’t remember for long time that so many folks would wait for promo album concert of home band which is on the edge between underground and mainstream. Even the national TV had recorded this gig. The most known and active band member is singer, who is the best freestyle battle rapper in Slovenia. He works under the name N’toko making some great music with social critical lyrics. His skills with words are obvious also at album See. See is mature album of a band who knows what they want and how to do it. I’m sure you will enjoy it.

This is not a conventional trio. It consists of bass, drums and vocals. They play great music that you can dance to while thinking of lyrics that are great reflection of time. They sing in Slovene and they are calling you to wake up and fight against politics without any holding back. They want you to start thinking with your own head! This one is the album of 2014 at Hrumag and is their second album. They started band as an answer to uprising against local government at Maribor which is second largest town in Slovenia. Jate means Flocks in our language as a metaphor for crowds we are gathered around different political ideas. Even if you will not understand anything, this is a great way to meet our quite complicated Slavic Slovenian language.

Vid Drašler is a drummer. He learned his skills at Zlatko Kaučič percussion and drums school. Well Zlatko Kaučič is one of the greatest Slovenian artists known internationally as an uncompromising improviser and composer. Vid has been taking his lectures even further. With his imagination he succeeded to create really a great album just with drum kit and few add-ons like hanging wrenches. It was published at SPLOH records, where you can find a lot of great Slovene improvised music.

This one is a DIY pearl. Mathias is a garage rock enthusiast who recorded all instruments at his living room by himself. He did it out of the boredom and for their friends. He has used his cheap effects which I must say sound like a garage rocket. He wanted to hire a singer but he rather drunk few beers and did it by himself. This music is bursting with energy. He even was discussing it to publish it at Slovenly records but well… beer happened. You don’t need to be only a garage rock fan to love this one.