When John Spencer Drinks The Kool-Aid... 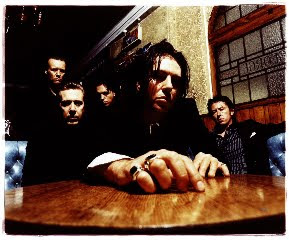 There is something inherently sexy dirty about out and out sleazy bluesy rock and roll. Antagonistic anti-hero John Spencer has been doling it out in heavy dollops over a long period of time, under many different guises, and it never ceases to amaze me how something so two-dimensional can still enrapture an entire audience and turn them into a writhing sea of hormones, sweat and leers. But Mr Spencer is but one man...

Lucky for The Jim Jones Revue then. The East London rabble rousers have been relentlessly scouring every dive and dank den of iniquity for a few years now, and all of this is about to come to a head with the release of their new album, Burning Your House Down, released by Punk Rock Blues Records / [PIAS] Recordings on September 6th. Produced by Jim Sclavunos (of Nick Cave &The Bad Seeds/Grinderman), the LP captures the roar of an untamed band at the top of their game. With the microphone shredding wail of Jim Jones at the helm, fearlessly spurred by Rupert Orton’s six-string maelstrom, Elliot Mortimer’s savaged ivories and the jackhammer rhythm section of drummer Nick Jones and bassist Gavin Jay, The Jim Jones Revue swing like a giant ball and chain.

Just to get you salivating over this, here are two extra tidbits - first single 'High Horse', is out on Monday, and the fourth track from the forthcoming album, 'Big Len', is below for your perusal and abusal. If you think there is too much sleazy rock'n'roll in this world, you may as well reach for that red cup brimming with Ratkill, because with the likes of these guys, plus the neverending energies of Nick Cave and John Spencer, floating around this great wide planet, there's gonna be a whole lot more being passed around. Me? Im reaching for my bottle of whiskey as we speak, sweat-stained leer firmly etched into my features. You know you love it...