Listening From The Back Of Your Head 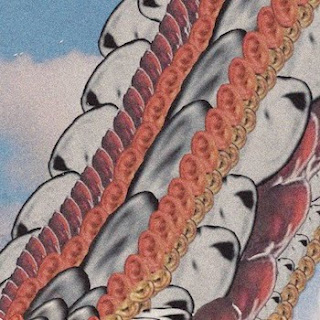 As mentioned earlier last week, PVT are headlining a invite-only Warp Records gig at Old Blue Last on Monday 6th September. And because im an advocate of all things PVT, I have a said invite. Not to gloat much, but Im pretty stoked. Nevertheless, Im also excited at tthe notion of finally seeing the support act, Hind Ear.

Hind Ear is a London/Brighton hybrid who have been oozing across the land dealing out their own brand of livewire electronic math. Their music is highly addictive, and whilst the comparisons to Battles are generically wide of the mark, they do hold similarities in the 2 step beats and histrionic musical interplay. You can also see why they stand alongside PVT at this special gig. I missed them at 1234, so Im intent to catch their whole set and give you a succint appraisal of their wares... They have released a 7" through Nouns of track 'Coconut', which is below.

Hind Ear are also playing the Social on 15 September with Cold Pumas and a special special guest, and support the uber fun Future Islands down at Brighton's New Hero on the 30th.

Hind Ear - Coconut
Hind Ear - Rain Man
PS. I read Pitchfork's review of PVT's 3rd LP Church With No Magic. I hate to be pernickety, but even though I strongly disagree with their views on PVT's (then Pivot) first two albums (I think they are both great, but especially their 2nd O Soundtrack My Heart is stellar) it still does come across as a little uninformed. PVT's name change was set due to a libel action struck against them by a piece of shit 'metal' band from the States, and by dropping the vowels it still phonetically is the same, hence able to maintain their initial fanbase whilst hopefully garnering more.
Posted by Brendan T