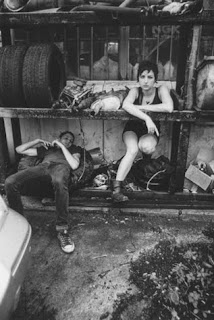 The Bitters, former Fucked Up/No Warning ubermouth Ben Cook's current project, shone with their sleazy opening LP East General, and as is his wont he is not slowing down for anybody. With Aerin Fogel in perfect howl mode, they have combined with Sacred Bones to bring out the EP Have A Nap Hotel, which the below track is on. As with Wooden Glove, the EP released last year, The Bitters are more titillating in short form, here they somehow manage to be both evocatively angsty and coolly detached, as if their shadows have torn themselves from their anchoring bodies and are marching to a different tune, yet syncopating with their masters... Anyway, as always a Captured Tracks release deserves to be owned, and with Have A Nap Hotel, you get to own the piece where The Bitters finally grow into the big boots they set before themselves twelve months ago.

Email ThisBlogThis!Share to TwitterShare to FacebookShare to Pinterest
Labels: Captured Tracks, Fucked Up, No Warning, The Bitters