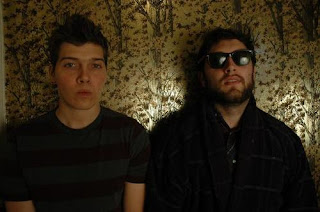 Si, you might be more than a bit happy.

After a number of conversations surrounding Small Black (in connection to another act Washed Out), I am finally posting a track, which features on new LP New Chain, out in October on Jagjaguwar. 'Photojournalist' features everything that people have come to expect from Small Black - deliberately skewed pop via demented jangly keyboard and effects, riding the chillwave...er, wave, but then cutting off other surfers whilst blithely flipping the bird, fading triumphant into the roll of another wave resplendant in their multi-coloured wetsuits. New Chain could have a number of meanings - their signing to Jagjaguwar has allowed them to cast off the murkiness of DIY recordings, freshening their sound and production to allow the mangled beauty of their compositions to shine through; but there is now a level of expectation that would be seen by some to be cumbersome in its misgivings. Im sure Small Black will shake off those shackles in no time.

NB - I find this kind of music incredibly strange. Not because the music itself is strange - its that on paper this has no appeal to me, and yet I become more and more enamoured with every listen. Whilst Si's opinion on music can swing into the WTF territory, this one is well worth the effort. Nevertheless, I don't think a Cheap Trick retrospective will be coming anytime soon...