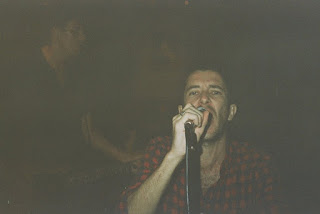 Still don't know how Clever haven't eaten up the Eastern Sea Board of Australia in their attempt to immolate all that is cautious and safe, burning the vanilla tastebuds from the bloated tongues of the elitist tastemakers, performing a Caesarean on the self-congratulatory nonpareil and casting the remains away in disgust. Is that too much? The snarling primordials don't take prisoners, that is fore sure, and their first album Kewdi Udi sandblasts this fact for half a blistering, boiling hour. But like most of the top-tier pigfuck punks, there is as much sneering inanity as there is molten fury, but the acid-in-the face vitriol won't allow you to know the difference. Don't bother trying to decipher Mitch Perkins' vocals - the dead-eyed stare, with the slightest twitch of the jaw signposting a degree of lightness in the dankness, is unrelenting, as is his red-lined vocal disintegration. Harry Byrne eats up Jesus Lizard guttural sludge and vomits it out in a bass slung like a bilge pump. Fred Gooch manages to slay most guitar gods and seem to stand still, deliberately fucking with the dead and the living; Callum Galletly comes over the top, a melodic Juggernaut, both grinding a groove and pummelling souls, a cathartic mortar and pestle.

Buy this piss-stained cyanide punch of a record from Homeless Records (who else?) here. Kewdi Udi slays.