The Life, Death, And Sort Of Life Of The Longdrone Flowers 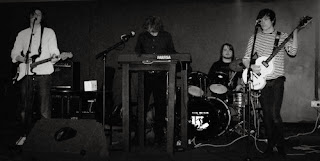 I have been meaning to write about northern England's warped weirdos The Longdrone Flowers for a few months (this is becoming a lame excuse, I know...). I've been a big fan of their Cesare Runs Away EP since it came out in June, what with its Eastern wooze, its stoned organ, its out-of-tune tunefulness, the weird nether region they straddle whereby you can never quite tell if their psych squalls are shtick or legit - its dark, raucous, and seductive, regardless of whether its tongue is jammed in you cheek or steadfastly ensconced in its own.


Then last month the UK dark wanderers unleashed another EP, She's Stranglehold Too. Doing away with the monikers such as Neurotic Wreck and Dirty Kraut, things are certainly more seriously understandable - 'Quiet' is anything but, a cacophonous no-wave grind that blows away all efforts before it; 'Wildfire & the Non Story' is like the Kinks tuning down and playing at being a lysergic Velvet Underground; 'My Sister, Drusilla' brings it all to a suitable chaotic close, starting off like an atonal guitar pop dirge before exploding/imploding/exploding/imploding, the expulsion of anger and anguish always in constant fermentation, never fully released until the last note dissipates. Brutal, and vital.

Fast forward to the present day, though, and the band are no more, burnt to the ground from fission, friction, and base predilections. But as is often the way with these things, this isnt the end of the story, and the main duo Rick and Dan have formed the somewhat aptly titled The Neropolis Felines. Stay tuned...
Posted by Brendan T

Email ThisBlogThis!Share to TwitterShare to FacebookShare to Pinterest
Labels: The Kinks, The Longdrone Flowers, The Neropolis Felines, The Velvet Undeground and Nico