Mates of State hear it for the Girls 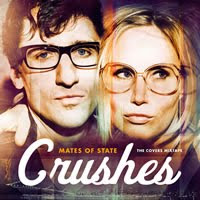 Im not sure if this classifies for 'guilty pleasure' status, but Im a rather large fan of Californians Mates of State. Their album Bring It Back from 2006 was a honey-drenched slice of sunny synth succulence; the husband and wife pairing of Jason Hammel and Kori Gardner are not only cute, but effervescent, their vocals entwining and fusing together into a giddily indulgent tsunami of uber pop; and they are catchy as all fuck. Although I didnt get into 2008's Re-Arrange Us, I still hold their intimate gig a few years back in Brisbane as a personal highlight, and am always interested in anything they have to offer (it says a lot when you start a conversation with "Thank God there was a Mates of State song on the soundtrack of that Adam Brody and Meg Ryan film...")
So two bits of info have been gleaned. Mates of State are bringing out a new album on their Barsuk label (home of previous postees Menomena) in the summer, called Crushes. Its a covers album, including reworkings of tracks by the likes of The Mars Volta, Nick Cave, Tom Waits and Death Cab For Cutie...actually all covers are well considered and are amazing renditions. And whilst a lot of fans salivated over Waits' track Long Way Home, it was the opening track, a cover of Girls' Laura, that took me most by surprise (actually, Mars Volta's Son Et Luminaire was probably the biggest surprise, but Ill leave that one for you guys to discover...). Girls' Album...er, album, was a solid LP that flew under a few folks' radar last year, so the inclusion of its most recognisable track here is a testament to both bands.
Anyway, enough of the waxing, more of the listening!
Mates of State - Laura (Girls cover)
Posted by Brendan T