GANG OF FOUR HAVE A NEW ALBUM! 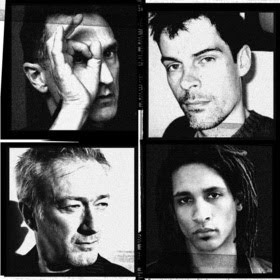 Ok big news on the post punk front, courtesy of nanig, she's to busy to post but almost frothing at the mouth at this one 'cos long time post punk legends Gang Of Four have a new album out, Content. But they're not rolling with this one in the normal manor, oh no. GO4 are running a pledge scheme where you can sign up to be part of the new album's lunch and pledge your support to the band, with a cut of the profits from pledges going to Amnesty International.

But the lads aren't just offering early CD's for your dosh (that option is only £10 by the way) if your felling really flush then you can ride to Glasto in a helicopter with the band (is that a sneaky self confirmation, or just some holiday time?) Or you might enjoy a listen to the first ever GO4 gig (recorded in Leeds in May 1977), provided on a cassette inside a Walkman individually decorated by Andy and Jon. For all the details and endless options (Andy Gill will even mix one your tracks for you for only grad and a half) than have a look right here. And let the band put in their own words.

No mp3s of the new tracks I' afraid but you can sample the track do as i say on the pledge site, but just in case you forgot what your missing here's one from the good old days.