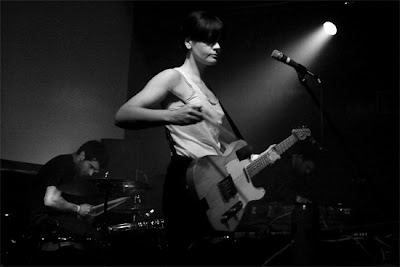 Whatever you read about Hackney's Factory Floor the word 'mysterious' always pops up and certainly when we saw support Fuck Buttons last week it's an adjective the band plan on cultivating. Their single stage light burning in the blackness of Koko like a dying sun, a waning beacon, an air of dark mystery gripping the venue... it certainly raised the level of intrigue and atmosphere I've rarely seen at the Camden venue.

Factory Floor have had a turbulent line-up change of late but that's seen them depart form dark male lead vocals to the even darker, more ghost like vocals of, well female vocals, other than that I can't tell you names. I know my research skills can be found wanting but trying to find out any info about this band seems almost impossible. If it wasn't for the morose, sober blend of smooth, New Order influenced, electro beats and heavy post-rock guitar, complete with violin bow, like nails running over a black board, backing this all up it would frustrating but last week at Koko and listening to the band's clear 10" it just seems apt, if not necessary.

Factory Floor seems to drifting on support slots all over London this summer (including a slot with sparse, brutal Australian rock act My Disco)...try and see for yourself.