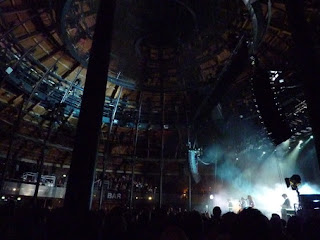 Its difficult to go wrong with the Roundhouse. A quintessential stalwart of the London creative set, the venue is custom built to impress, regardless of the the art that is on display. The amount of vantage spots, the superior sound quality, the capability to pull out all the bells and whistles, means that even the most mediocre creative hacks would be able to offer something exciting to the most jaded of audience members.

Two bands stepped into the round arena armed with only their instruments, and a helluva lot of enthusiasm and zeal. Two Door Cinema Club were first cab off the ranks. They ripped through an entertaining and well executed set that mainly mirrored their efforts from their debut LP, and their highly danceable indie disco guitar tunes impresses many. Although there is nothing new on offer here - any number of the Temper Traps and Big Pinks that have flooded the music scene over the past few years would have done an equally adept job - and there is enough here to entice, there is not enough to grab your attention enough to elicit an ecstatic reaction. They are the perfect primer for big and better talent - so in this instance they do it with aplomb - but one cant help but think that there needed to be more experimentation, more variation, more verve, if Two Door Cinema Club want to be packing eager punters into a future venue such as this like sardines, all on their own merit.

After much tinkering, a white sheet falls across the front of the stage. There is a heady pendulum of hushed tones and ecstatic euphoria from the crowd as the first few insistent notes of Lisztomania emanate throughout the Roundhouse's collosseum-like interior. The band are backlit by scorching light, so that their shadows jump forth in erratic interplay. Much like Sigur Ros' stage presence, albeit far less static, the tension builds until the sheet drops, and from the stage rises French guitar pop heroes Phoenix, vertical lights of blue flashing dominantly to emphasis their truly soaring from their beginnings (albums previous to 2009 were no means mediocre, but lacked some element of cohesion) to be the top of the hipster music heap (on the back of brilliant LP Wolfgang Amadeus Phoenix), and for the next two hours set the stage ablaze.

There are elements of NY's The Strokes in Phoenix's tightly coiled and innately sexy pop vignettes, cooler than thou musical manipulations, and elegaic showmanship. However these boys have built on their initially simple song structures, have not rested on their laurels, and continue to push boundaries. Their songs are still infectious as fuck, causing myriad hips to sway and toes to tap. But Phoenix's brilliance lies in the seemingly effortless way in which each song, and indeed the entire set is constructed - it is easy to forget that every one of these French guys are freakishly talented at their weapon of choice. The set, a selection of songs gleaned from all four albums that make up their back catalogue, are heightened exponentially. It is difficult to remember ever not like Phoenix, let alone why it is that you dont listen them ad nauseum from the moment of rising from your slumber to the point where REM sleep inevitably kicks in. And will continue to do so for the term of your natural life. By the time they pumped out their 2 song encore, closing with seminal crowd fave (and superbly elongated) 1901, it was clear that the Roundhouse has showcased another slice of art. Phoenix - uber cool, tres accessible, and utterly transcendental. Tonight was a true precursor of what a band with this much potential will acheive as they engulf the Earth in all their effervescent glory. A complete success.
Posted by Brendan T