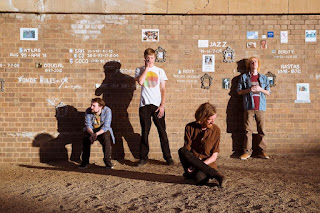 Sydney shoegaze psychos The Laurels are back with a new lineup and a new song. Jasper from Decoder Ring has stepped in for Kate Wilson; and 'Zodiac K' is the first taste of the new Laurels (or any Laurels for a number of years). It's a bit of a weird, sinuous number, focusing heavily on samples, effects-shrouded vocals and a lazy, hazed groove throughout. It's a complicated hit, shirking the more shoegazey aesthetics from their hit album Plains for something more freeforming and experimental, floating in the freak paisley psych realm (which you could say Perth band Pond resides in; it isn't a surprise to see ex-Tame Impala/current-Pond Nicholas Allbrook co-touring with the band this month). It will be interesting to see where the guys head next, that's for sure.