Trash your kit even more 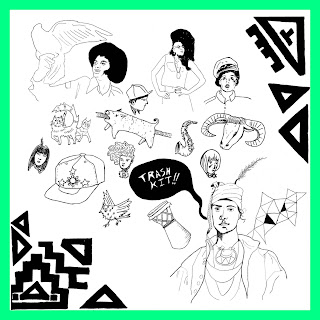 I've been meaning to post about Trash Kit's self titled debut album since it dropped a couple of weeks ago. Rutting forth that stable of all things wholesome, and SM's favorite London label/promoter Upset the Rhythm Trash Kit arrived on the scene with a collection of live shows at the start of year. We first came across them supporting The Vivian Girls at Dalston's Trinity Centre and again supporting Turn Yards at Cargo, both gigs left me impressed and hopefully for the band's future but I certainly wasn't expecting how Trash Kit seem to of rocketed to notoriety in the last few months, now their bloody everywhere!

This weekend they just put a set at ATP curated Matt Groening (a billing that many bands have to wait years for) and they've even landed a support slot with The Raincoats on the 20th. Either this band have a kick arse booking agent or people are giving them some serious attention. Not that it matters 'cos with album like Trash Kit's debut they can certainly back up the billing.

Trash Kit's self titled long player might consist of no less that 17 tracks but its is no slouch, rattling through in under 30mins, the longest track Natascha lasting only a shad over three minutes and most tracks not clocking over half that. Trash Kit always seem to sit between playful care free charm and dark intricate screaming mischief. Stripped back playfulness and a lightness of touch is woven into their colourful compositions as much as the pauses and flips in tempo but I can't help being left with a feeling of something more sinister, like the grin of a hyperactive clown.

Maybe its the face paint, somewhere between 'the mental kids at the crèche' and 'African witch doctors from outer space' or maybe its the African fingerstyle pattern informed guitar crossed with the striped back driving bass rhythms. Its probably more to with the honesty of the band, a band having good honest fun but not afraid to dwell on darker themes, even it its for the briefest of seconds. Out on Upset the Rhythm records now you can purchase here. Tasting below.