My Disco heads the house bands from Hell at the Lexington, 13 May 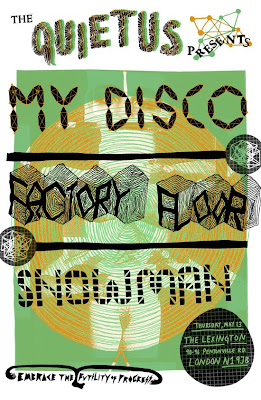 Im excited to the max about a gig coming up very soon, next Thursday 13th in fact @ The Lexington. Being Australian, some might say Id be biased about our music when it comes over here. Not so - much of what is known about current Aussie music comes from major label shit or from current NME-backed bumfucks. But there is many an amazing band floating around that largely uninhabited continent, and the incredibly intuitive folks at The Quietus are bringing two of Australia's best small acts, My Disco and Snowman, to the stage, along with a rising London group already mentioned favourably here, Factory Floor.

Snowman originated in the Western Australian capital of Perth. The band, consisting of band members of varying backgrounds (Indonesian, English, Icelandic and Australian born...), are a crazy meld of punk, post-punk, blues, and weird moody atmospheric shit. The tension inherent in each and every song makes them a unique act, at once difficult to access and impossible to ignore, with a disgruntled demeanour that attracts and repels. Very exciting indeed...

Factory Floor is of note as the other time I saw them was also supporting an Aussie band - that time it was the Sydney originated/London based maestros Pivot. I was impressed then by their hypnotic swirling songs and their cold demeanour. After Paul's two thumbs up the other week, it sounds like they have come from strength to strength.

The headliners are Melbourne's own My Disco. The three piece have bludgeoned their way all over the continent and the world, with their 2 albums and various other releases showcasing a band that is not afraid to expand on what is essentially the most stringent of brutal minimalist rock. Each song threatens to explode, and yet the tension is invariably reined in. Each instrument is syncopated, somewhat out of sync and yet intrinsic to the organics of the overall soundscape. Their sets are the epitome of strained aggression. Rumours have it that a more permanent move to these shores may be on the cards too...

I am busting at the seams here!!! This will be an amazing show, and at 5 squid who can argue? Just to whet your appetite, here are some tracks - My Disco's is their latest single - all 11 minutes of it; Snowman's from last album The Horse, The Rat and the Swan; and Factory Floor's is an older track as their newie is already floating around on SM! Enjoy!

Snowman - We Are The Plague