Woodsman Are On Far From Rare Form 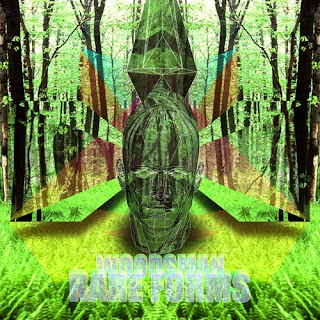 I have been mightily excited about Woodsman's Rare Forms album since midway through last year, when I stumbled across their EP Mystery Tapes and systematically lost my shit. And before I say "I told you so" - and I will - I found it absolutely infuriating (and a little ironic seeing as I had just reviewed Toro Y Moi's newie Underneath The Pine - see that review here) that some of the initial thoughts labelled the sound of the new LP as chillwave.

Im sorry - maybe Ive been confused all this time about what that supposed "genre" was all about (and yes, its in past tense, because the fucking thing is DEAD. The best bands and artists that spawned out of that sound have grown exponentially since then and have invariable spurned the genre, whilst the rest died from internal haemorraging after participating in a 24hr bumming circle with themselves). Shouldnt there be sampling, effects, loops, and hypnagogic bullshit as opposed to live instrumentation and inventive percussion that swirls into a psychedelic haze that only strengthens as it stretches taut? Sure, there are shoegaze and psych elements in most of today's music scenes, but generally those who are labeled 'chillwave' come across as trite, self-involved and...well, shit. Or its incredibly lazy journalism. Or both. Usually both.

But back to the review. I cant say that Rare Forms is an original album in the sense that some of the tracks have more than a couple of Animal Collective's fingerprints molded into the amber, especially the middle pair of tracks 'I Cant Move' and 'Future Pulls' - melded as one it is like hearing a rustic hoedown cover of 'Banshee Beat'. Even 'Beat The Heat' cant escape this comparison, despite the haunting harmonics and tribal drumming that swirls to the forefront of the track - and this is solely due to the new vocal additions by band member Mark Demolar. But that should not be a bad thing - and the rest of the album justifies this momentary aping, as the Denver trio endeavour to capitalise on the gruff axe-wielding haziness that Mystery Tape intimated. The dark 'No Dialogue' is an Earth-esque desolate instrumental with Branca-esque dissonance, whilst on 'Burial Ground' the percussion rises into a cacophonous maelstrom ridden by soaring choral vocals. Opener 'Insects' retains much of the sound inherent in their earlier stuff, and remains just as exciting, enhanced by Demolar's off-kilter vocals.

So even though this was not the instrumental psychedelic blitkrieg I had envisioned, it is an utterly beguiling album nonetheless, and should not be hindered by its adherence to certain AC traits. It is a tightly wound yet surreal sonic journey, and heralds an exciting band that will surely flourish in the next 12 months.

And they aren't fucking chillwave.

Rare Forms is out on Lefse Records - buy it here.