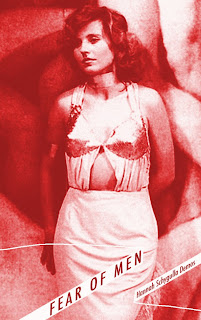 Those reprobates over at Sex Is Disgusting Records have pumped out 50 copies of this, a little tape from the guys in Fear Of Men (You can grab it here). Its their debut release - and a solid one at that. The Brighton four-piece waver between the sunny shimmy of Best Coast and the darker psychedelic groove of Warpaint, and manage to hold that balance without falling into the pit of inanity, mediocrity or pretension. In fact, its still steeped in reverb and echo, the basics of the guitar lines harking back to simpler times - yet there is a heightened sense of amiable pop knowledge coupled with a distinct lack of Self in these tracks that denotes the distinct possibility that these guys will break free of any name tags (which I have inadvertently done here, haven't I?) to be able to stand on their own. Definitely ones to watch.

You can travel down to Brighton to see Fear Of Men support Former Ghosts this Friday at The Green Door Store. Expect them to sneak into London on occasion as the year progresses, picking up some sweet support slots on their way...