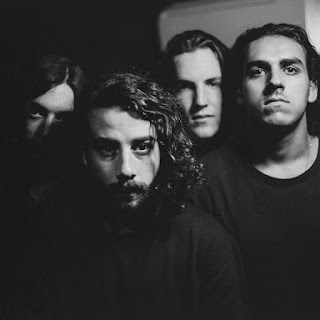 Keeping the sporadic posts yet the more together premieres rolling, we have a release here that Sonic Masala is promoting. Nothing Lavish is the second EP from Brisbane band Twin Haus. The four-track release kicks off with the 9 minute long Radiohead-meets-cracked-Cordrazine 'Synthetic Egg' - the building atmospherics buoyed and pierced by the horns is both haunting and hedonistic, a swirling miasma of widescreen asceticism that is breathtaking in its audacity - the final euphoric moments evoking ()-era Sigur Ros. Lofty comparisons there, I know - but this opening track really slapped me in the face with how lavishly confident these boys are. It bleeds into the brooding ASDL stutter and Tortoise sharp sputters of 'Self-Love', spiralling outward into a distorted whitewash at the end of its meticulous two minutes. 'I Used To Think', the lead single, is the most "palatable" of the four tracks - the most obvious signifiers of Twin Haus all present and accounted for. It flitters on the edges of much-missed Sydneysiders Parades, while also offering the slight-psych sheen of early Temper Trap, while closer 'The Revue' is a serpent, slinking through the shimmering confines of their glossy aesthetic, again playing with artistic reverence (Holy Fuck combine with more prosaic psych rock touchstones) and aired avarice, in a double-digit-minute monolith that sounds like the record skips from 33 to 45rpms in the final third. Some seriously awe-inspiring moments on this record - Twin Haus have taken some recognisable, somewhat staid mainstream signposts and woven intricate, somewhat aggressive segues and flourishes around them. These tracks will sound brilliant live, and most of Australia will get the chance to experience this in April and May as they launch on a massive tour, taking in most of the country including plenty of rural outlets. See the artwork and full run of dates below. 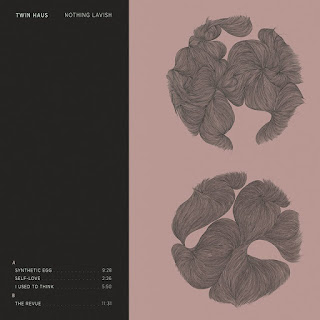 Nothing Lavish is out today via Bedlam Records.
Posted by Brendan T