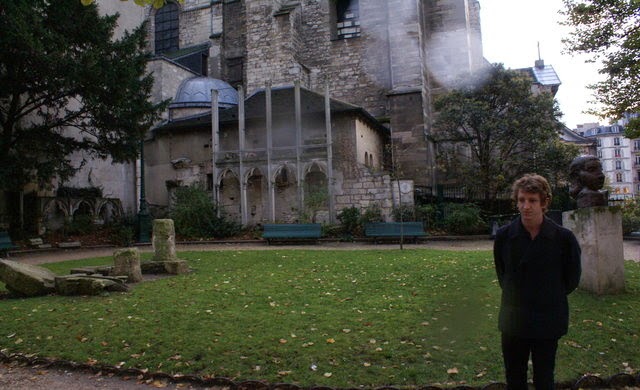 Where In The World Is Nathan Roche? should be the next geographically-minded educational noir game to take your iOS Android by storm, dumped unceremoniously on all smartphones by iTunes and the Illuminati, in the evil conglomerates' neverending quest to hunt down the irascible, barefoot troubadour before he tears down the curtain - all while teaching the kiddies about global currencies and local cuisines. Admittedly it's pretty easy to find him in the above photo, but I assure you the game would be much tricksier...

Anyway, Glenlivet A Gogh Records have announced that Roche is about to dump his third record on our doorsteps in a flaming Nando's bag, and I couldn't be happier. Cathedrals Made Outta Green Cards is as laconically silly, verbose and charming as you would expect from the man who brought us Watch It Wharf and Magnetic Memories - but don't take my word for it, listen to the man himself!


Press release? Ha! More like an obituary. A death note! The carving inscriptions on a rugged tombstone in a graveyard. CMOGC is Nathan Roche’s third and final report – may he rest in peace six feet under. Following “Watch It Wharf” which could be seen as a record loosely about the working class and wharfs, to “Magnetic Memories” touching on subjects of paradise, luxury, islands and whatever else. CMOGC is about death, transition and two vastly different grand cathedrals. But lets not get too caught up in the half-thought out concept behind the record. Following a European Tour, and a US Tour (with Angie of Circle Pit, Straight Arrows, Ruined Fortune) including shows with fellow Australians Gooch Palms, Scott & Charlene’s Wedding, Deaf Wish, The Stevens, Ausmuteants and being invited to the prestigious Memphis southern romp, “Gonerfest” … “CMOGC” was conceived over a few days post EU tour whilst riding up the mountain of Tibedabo in Barcelona on a rusty pawnshop bicycle each morning. Of course, the songs were brought to the table and then destroyed, rebuilt given a new paintjob and coat of varnish by reliable collaborator and fellow Townsville transplant Joseph Ireland once arriving back into Australia.

“Grand Piano” feels like surrealistic nostalgia. The subject matter of “Airport Bar” will be familiar to most Australian travellers stopping off in Dubai or Singapore, Bangkok and so on. “Phantom Blues” is fucked up Phillip-Marlow country with a winning outro arrangement. “Tell The Canal” could be Cowboy In Sweden-era Hazlewood if it was made in the 80s with a tacky keyboard. “Breakdown” is psychedelic blues, in the vein of Tav Falco’s Panther Burns. “War Of The Garden” is just plain ridiculous with a rippin’ 1980s heavy metal guitar solo by Ace Romeo (Andy from Canberra’s “The Fighting League”) Oh! And of course there’s rollicking piano.

The standard cult heroes are here to be cryptically ripped off yet again, Lou Reed, Kevin Ayers, Lee Hazlewood, Alex Chilton, Nikki Sudden and the usual suspects probably mentioned in an earlier press release or on three or four well-to-do blogs. A prolific self-published writer, Roche has taken the “risky” plunge into spoken word segments for the finale partly inspired by the ballsy-ness of British eccentric Ivor Cutler and French musician/author Brigitte Fontaine. Featuring a similarly mad Fellini-cast to the previous solo records plus the addition of fertile French singer/musician Mariette Auvray (Pussy Patrol, Eyes Behind, Water Sark, BCBG) the before mentioned Ace Romeo along with Drew Hudson (East River/Wild Cat Falling) combines for a unique listening experience. “CMOGC” is a salty salute to the most unambitious and dismissive man of the Australian Underground. A man of many friends, few enemies and unbelievable luck. Said to be pulling a “PB” (a “Paul Bowles”) Roche has left the recording making for good without ruling out the possibility of a string of “comeback albums” in his post-rehab mid-forties.

For now, it’s a life of adventure, writing unpopular books and working shitty jobs in foreign lands. THIS IS THE THIRD AND FINAL REPORT OF NATHAN ROCHE SO-LONG!!

Yeah, that's the whole presser, but I couldn't resist, the man had me at "death note". We will hear plenty more from the John Farnham of the Sydney dole-living underworld yet, as he continues his global subterfuge, stealing hearts and losing minds. (NB - I'm not sure any of this makes sense, or if that even matters. Just listen to 'Phantom Blues' and get on board).