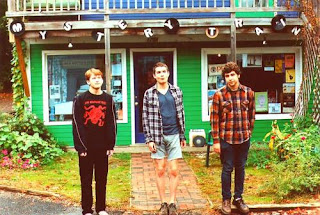 It wasn't all that long ago that I was raving about Western Massachusetts band Psychic Blood's three track EP Strain. Some anonymous bystander immediately slung me their debut longplayer, Autumn Curses (whoever you are, you are radness personified!), and I've been listening to it intermittently ever since.

Unfortunately for me it doesn't quite live up to the expectations laid on by the EP, but that is also because the EP was three songs in length. At this point in time there is a similarity throughout Psychic Blood's sound that runs the risk of repetition - the same squalling guitar line seems to trickle through a brace of these tracks. There are many touchstones to the first And You Will Know Us By The Trail Of Dead album here also, which is amazing and it still kills due to its lo-fi production and aggressive approach, as well as echoes of Conrad Keeley's vocal delivery - which depending how you look at it equals ten tracks of emulating brilliance, or ten tracks of varying degrees of 'Richter Scale Madness.' Not all tracks blend into each other - the ambience of 'Roving Mind' and the slow down harmonics of 'Here Is No Truth' offer other swatches of depth to the mix. 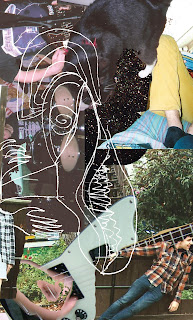 Autumn Curses (out on Feeble Minds Records/Damage Mailorder - grab the cassette here) is still a solid album, with some killer tracks on there that help to augment the effectiveness of this trio as a brutal live force. It's not all there as a rounded album though. Psychic Blood are a band to be fully supported though, and with their next recordings having Justin Pizzoferrato (Dinosaur Jr., Sonic Youth) is in the recording seat, I'm salivating already.

Email ThisBlogThis!Share to TwitterShare to FacebookShare to Pinterest
Labels: And You Will Know Us From The Trail Of Dead, Damage Mailorder, Feeble Minds Records, Psychic Blood